Akira has to be one of those groundbreaking movies that even after all these years since it first came out still has the power to excite and delight the watcher and it’s one of those films that I’ve always wanted to see on the big screen and tonight I got to see it in IMAX at Cineworld in Broughton.

I first saw Akira many years ago on VHS, with subtitles and with its original Japanese soundtrack, for me it was a pivotal moment in my film-watching experience.

Not only was it an animated movie, but it was one with an adult rating, which intrigued me and I wasn’t disappointed with it at all. Those days of “cartoons” were going to be left behind as I had discovered the world of “Manga“.

Right from the very start, I was gripped again by the action and amazing animation of Akira, its powerful storyline and characters that you could actually sympathise with throughout the movie, but also watching the movie in its subtitled version brought a whole new outlook on my movie-going experience.

But nothing compares to seeing a film like this one on the big screen and although the trip to Cineworld was a sad one, as it was the last night before Cineworld closed its doors due to the Coronavirus Pandemic, it was the chance to see a film that I have loved since the first time I saw it, also who wouldn’t jump at the chance of seeing Akira in IMAX and 4K!

There is only one word that can describe Akira and that’s “Masterpiece”, this Japanese animation from director Katsuhiro Ôtomo is still a movie that stands the test of time for fans around the world and seeing the film in IMAX has given me a new sense of appreciation for its look and sound.

Akira in IMAX not only looks amazing with its bright colours and those amazing looking light trails on the bikes on Neo-Tokyo, but also the sound mix is truly outstanding, I heard so much more detail in this release than I ever have before, the bass powers through the sound system pulling you into the film along with the Sound FX that are used in every corner of the room, plus the wonderful soundtrack from Shôji Yamashiro came to life even more on such a powerful IMAX sound system.

Later I would grow to love and watch many more movies such as “Crouching Tiger, Hidden Dragon” and “Night Watch” in their native tongue.

The sheer power that a movie such as Akira has for the viewer is something that not many Anime movies can surpass and it has to be a movie that everyone should have in their movie collection.

Animation Is Not Just For Kids

There are those that mock the animated movies and some instantly say “Oh it’s a cartoon, aren’t those for children”, which really annoys me, it’s only another medium for filmmaking after all.

And today, I still enjoy Akira and having a remastered version on DVD with its crystal clear picture and sound and several different versions that just makes it even more enjoyable. I suppose you could say that Akira is a “Modern Classic”.

AKIRA is simply a masterpiece 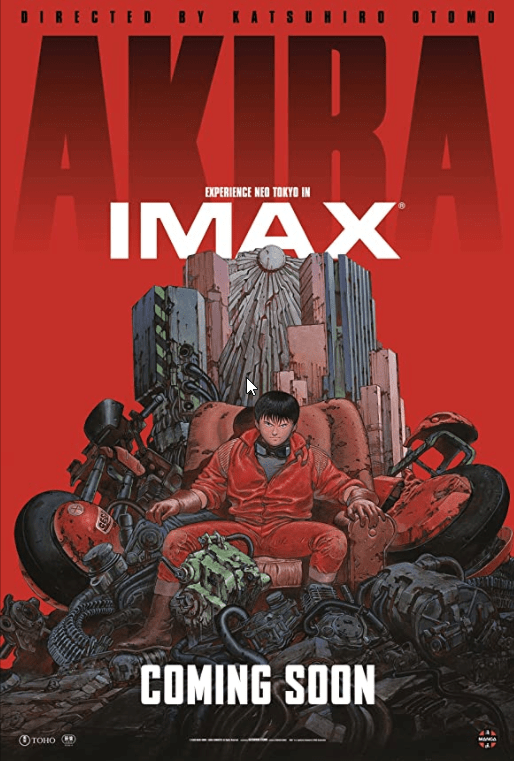 Movie description: A secret military project endangers Neo-Tokyo when it turns a biker gang member into a rampaging psychic psychopath who can only be stopped by two teenagers and a group of psychics.

Karen Woodham is the founder and owner of the Blazing Minds. She is also a Cinema reviewer, based at the Scala in Prestatyn and also works with RealD 3D reviewing the latest 3D releases, she has also had several articles published in various publications including the first edition of SFW Magazine. In 2015 she became an Award Winning Blogger and also has her website listed as one of the UK’s Top 10 Film Blogs.